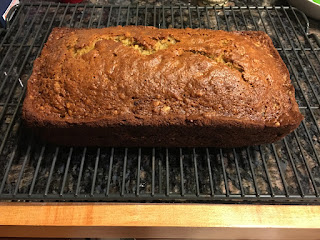 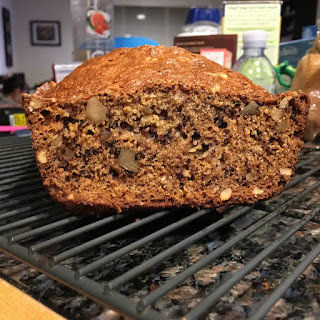 On to the next bake!
Posted by Korova at 9:13 AM 3 comments:
Email ThisBlogThis!Share to TwitterShare to FacebookShare to Pinterest
Labels: alton brown, baking, banana bread, muffin method

My wife and I have always been into "food" shows and we have also enjoyed the occasional reality show. We like reality shows that seem less interested in creating drama and more interested in awarding contestant skill. So food reality shows are an easy watch for us. In fact food shows have fueled our enjoyment of cooking and provided us with a library of books by Jamie Oliver, Alton Brown, etc.

Last year we started watching a baking reality show. Nearly every single item produced in the show is something I wished I could eat. I love breads and pastries, but baking is something I've never really done unless you count store bought cookies that come in a tube that you just lay out on a sheet.

Baking has always scared me because it seemed like it was hard to get right, hard to be consistent with, and hard to play around with without screwing up the formula.

Then I thought about it some more.

When I cook, I use as much precision as possible and try to keep the fewest amount of new variables every time I do it. I weigh all my ingredients and I use a laser thermometer to make sure my pancakes cook at exactly 350F on a gas stove. Hell, I right now I even weigh my coffee and water every morning. In grams. The more I thought about this, the more baking seemed to make sense for me. In fact baking might even be more up my alley than regular cooking. It seems like baking rewards precision. I like precision.

So the natural place to start was Alton Brown's I'm Just Here For More Food, a sequel to I'm Just Here For The Food. I've read the first book, but I've never cracked open the second one. My wife even forgot we owned it. I think we just bought it for completion purposes. Why did I never read it? Because it is entirely about baking.

I've made the first recipe from Alton's book: Old Fashioned Muffins. I've made them twice actually. They were not without their flaws, but they proved to me that I think I can do this. Looking at what to cook next I decided it would be fun to try a new bake every week. It just happened to be the end of 2015 so I had the idea of trying to do 52 bakes this year.

It was suggested that I blog about them. Except that...

This blog is likely to stay a shrine to failed projects and this one may fail too. Oh well. I don't give a shit. :)

Here are the rules:
1- I'm not going to confine myself to rules or set myself up for failure. If this turns into only 51 bakes, oh well. Oops! I'd rather keep baking than feel like I messed up my challenge to myself.

So we'll try it out and see where it goes. Ready, set, bake!
Posted by Korova at 3:17 PM No comments:
Email ThisBlogThis!Share to TwitterShare to FacebookShare to Pinterest
Labels: baking, cooking

Just got back from Iceland! It was a pretty amazing trip. Quick aside, project 365 died. I was too behind on uploading and then missed a day by accident. But regardless I'm going to keep taking photos and see if I can find a new edge.

The 28mm was a xmas gift from my wife and it's quickly becoming my favorite lens. Having a fixed has really forced me to think about composition and to walk around my subject if I don't like the framing instead of just zooming in and out.

While I didn't have 1 photo I thought was spectacular, here are some of my favorite pics from Iceland:

Posted by Korova at 8:32 PM No comments:
Email ThisBlogThis!Share to TwitterShare to FacebookShare to Pinterest
Labels: photog, travel

Well a successful start to having a photo a day but a slightly disappointing time I think.

The major focus of the first 13 days is to try to get into the habit of taking photos every day. I tried really hard to not just go out for a "365 photoshoot" but to take photos throughout the day.

As expected, work days are the toughest and I rely more on my phone for them. When I get home it's already too dark for any sort of outdoor photo.

My biggest hope to get through the weekdays is to assign a weekly theme to focus on. My first weekly theme was "introductions" to sort of ease into the whole thing, So I took photos of myself, my camera, my cats, etc.

The theme for week 2 quickly became iPhone photos as I tried to play around with how to creatively take photos with the phone. It produced some interesting results, especially with KitCam and its selective focus and fake "tilt shift" lenses:

My theme for week 3 will be "bokeh" since I received my lensbaby aperture pack 2. That should hopefully turn out pretty interesting. Possible plans for week 4 include something that can be done around the house (dark outdoors) maybe a day each of something I own or photos from the perspective of the cat.